As spring break approaches, I started thinking about a topic that’s close to my heart: travel.

I love to travel and experience new places, people and food. I love to return from a successful trip and share my experiences with others, encouraging them to travel there, too. I’ve enjoyed trips to Canada, Israel and throughout the United States.

I love to plan trips where everything just falls like dominoes.

Then there are the trips when everything goes wrong. The plane is late or never takes off; I travel far to a nice spot, only to have lousy weather ruin the experience.

We went to Myrtle Beach one year, and it was so cold we couldn’t swim or enjoy the outdoors at all. During our travel in Israel, we missed visiting several sites because we went there on holy days or just after the site closed. (I handled it better than Mr. Griswold.)

A whole book of the Bible, Jonah, is devoted to what can go wrong while on a trip. After a storm, Jonah ultimately volunteers to go overboard to save everyone else on his ship. Talk about a bad voyage. Since then, a “Jonah” has become someone who brings bad luck. Likewise, in the movie “Master and Commander, the Far Side of the World,” the crew blamed an unpopular midshipman for the lack of wind to move the ship. He, too, throws himself overboard for the ship’s sake. Again, not a pleasant voyage for the midshipman.

I often just drive to our destination. But have you ever thought about the folks who move you around when you take public transportation? Whether the method is plane, ship or train, hundreds of employees are probably involved in moving you safely from one place to another. Pilots, captains, pursers, flight attendants, cargo workers, dock workers, cooks and cleaning staff. All might become injured helping you to your destination.

I’ve previously written that trains were once the primary method of traveling around the United States. Through the years, often after a tragedy, the safety of passengers increased due to regulation and modernization.

For example, for railroad employees, did you know that a train used to carry on top of the train brakemen to apply the brakes in various situations? This often required the brakemen to work while it was moving. Hundreds of these brakemen were injured performing their jobs.

Consider also the men who coupled the cars together. Before the invention of self-locking coupling mechanisms, the majority of railroads in the United States used link-and-pin couplers that required men to work between cars. When the cars neared each other, the worker would place a pin between the links to couple the cars. Again, hundreds of injuries occurred.

In an effort to deal with railroad injuries, Congress passed the Safety Appliance Act of March 2, 1893. The Act and its later amendments required railroads to install air brakes and automatic couplers for trains involved in interstate commerce. Before this, individual states had some safety requirements.

The question was whether Congress could require intrastate railroads to comply with the law. Southern Railway objected to this safety provisions and sued. The Supreme Court held under the Commerce Clause that Congress could regulate intrastate railroad activities because interstate and intrastate activities were commingled. The Act and its revisions were a godsend to employee safety. Injury rates dropped dramatically following passage of the law and the mandatory use of air brakes and automatic couplers.

So here’s to safety and an enjoyable trip the next time you travel, whether by plane, train, ship or automobile, for you and those getting you there. 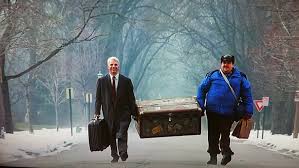