I have always liked a hero.

When I was in the seventh grade, I met one of Alvin York’s sons.  He brought the MGM movie “Sergeant York” to my school, showed it, and also gave a talk about his dad. I was one of the few kids who knew about Alvin York and had seen the movie before, and I was awed to meet his son. Alvin York was a true Tennessee war hero. I encourage you to research his life story.

Liking heroes, I often tried to emulate them as a child. I jumped off houses, out of trees, across basements steps (the latter being a fail; I can show you the scar). I often found myself rushing to those injured or in danger–not because I was feeling heroic, but because I wanted to be heroic. You know the feeling when you stand on the mountain, plant the flag and proclaim success. I actually tried to make up for my backwardness and shyness that plagued me during childhood.

One (there were many) of my greatest fears was water. It took me until I was thirteen years old to learn how to swim. I was so embarrassed by it all, but I just could not let go from the side of a pool or dock in deep water. I was the oldest kid at camp who could not swim. My uncle’s family built a pool one summer, and it was in that pool I finally conquered my fear and learned to swim.

Shortly after I learned to swim, the show “The Greatest American Hero” debuted on ABC. I loved that show. Talk about a hero. Not only did this guy have a suit that gave him super powers, but also he was a teacher! Teachers were always my heroes, and I loved the fact that this was a common guy who suddenly became a hero. I used to go around singing the theme song “Believe It or Not,” wishing for the opportunity to be heroic.

About two years later, my school took a field trip to the YMCA. While there, boys will be boys, and a small scuffle started at the edge of the pool. One boy jumped in and the other jumped in after him — forgetting he did not know how to swim and that he was in the deep end. I was swimming underwater as the boy came down next to me. I wish you could have seen his face when it went from anger to shock. The boy was much bigger than I, but I was able to push him with my feet and hands to the shallow end. He had never paid that much attention to me before. After that, things were better. At the time, I felt heroic, but over time I felt I just happened to be in the right place at the right time (he would not have drowned; there were others there who could have fished him out). 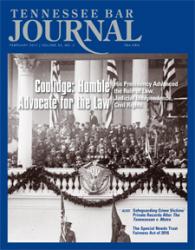 Recently I was reading the February 2017 edition of the Tennessee Bar Journal. In the cover story article on Calvin Coolidge, there is a photograph of President Coolidge shaking hands with Tom Lee, a Tennessean credited with saving the lives of 32 people on May 28, 1925, when the M.E. Norman sank in the Mississippi River.

That morning, Mr. Lee dropped off his employer in Helena, Arkansas and was on his way back to Memphis by small boat when he observed the Norman sink. Mr. Lee repeatedly risked his life in the swift currents, picked passengers out of the water, and took them to shore. He then built a fire to keep them warm. He was an instant hero. Grateful citizens donated money and purchased Mr. Lee a home, and the city of Memphis hired him. A few years after Mr. Lee passed, the city honored him by naming a riverfront park “Tom Lee Park.”

I also encourage you to research Mr. Lee. He truly was a great American Hero. By the way, believe it or not, Mr. Lee never learned to swim.