Judges on the Tennessee Workers’ Compensation Appeals Board, from left to right, are the Hon. Timothy Conner, Knoxville; the Hon. Marshall Davidson, Nashville (presiding); and the Hon. David Hensley, Chattanooga.

Does the discovery rule as it relates to the one-year statute of limitations remain viable under the Workers’ Compensation Reform Act?

Attorneys responded to vigorous questioning on this and other weighty legal issues from three cases at the most recent oral arguments before the Tennessee Workers’ Compensation Appeals Board. The arguments took place on Tuesday, July 25, at the Supreme Court Building in Jackson. 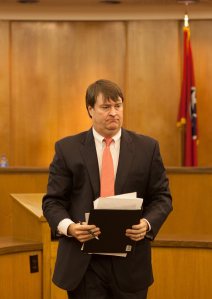 In the first case argued, Johnson v. Stanley Convergent Security Systems, the three-judge Board probed whether Judge Robert V. Durham, Cookeville, erroneously denied Stanley’s summary judgment motion because sufficient material facts were in dispute regarding whether Don Johnson was unaware that he suffered a compensable injury until several months later.

Stanley also argued that the trial court erred when he sua sponte determined Mr. Johnson’s Petition for Benefit Determination was amended to reflect a later injury date. Mr. Johnson allegedly suffered two separate work incidents, in March and June 2015. However, the PBD, filed in June 2016, described only the March 2015 incident, and the date of injury is scratched out.

Attorney David Riley, representing Stanley, acknowledged that pre-Reform Act case law calls for the discovery rule but questioned its logic. He noted that claims conceivably could last 20 years or even a lifetime waiting for a physician to diagnose a work injury. The statute of limitations, section 50-6-203(b)(1), makes no mention of the employee’s knowledge of the compensability of his claim, he said. Further, section 50-6-116 now requires an impartial construction of the Workers’ Compensation Law.

“It never made sense to me that we construed it liberally and somehow read into it a doctor’s diagnosis. But it happened,” Riley said. Now that the remedial construction is gone, “You can’t read into the statute more than what’s there.” 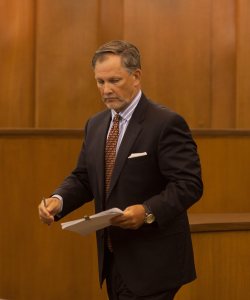 Johnson’s counsel, Richard Click, countered that technically the statute of limitations hasn’t expired yet because it wasn’t until January 2016 that his client learned of his injury.

“That was the first time Mr. Johnson knew he had a torn rotator cuff. Before, all he knew was he had pain going down his neck and going down his arm. He doesn’t know what he’s got and what caused it,” Click said. He additionally chalked up Mr. Johnson’s delay in part to Stanley’s denial of the claim without offering a panel. He also emphasized that the discovery rule has not been overturned.

The legal equivalent of ‘never mind’

In another case, the Board must determine the legal effect on the statute of limitations of an employee’s “withdrawal” of a PBD in mediation.

In Taylor v. American Tire Distributors, the mediator filed a “closing report” in July 2015 regarding an alleged injury where ATD made one voluntary payment in October 2014. Vincent Taylor filed another PBD in March 2016.

Judge Joshua Davis Baker, Nashville, denied ATD’s summary judgment motion, reasoning that the withdrawal was akin to a voluntary nonsuit, but since the court never actually entered a nonsuit order, the claim was never dismissed and remained viable.

Both lawyers looked to the report for support.

But counsel for Mr. Taylor, Luvell Glanton, pointed to text offering the reason for withdrawal as “to gather additional medical records,” which language conveys an intent to further pursue the claim. Moreover, the report wasn’t a court order but merely a notice.

The reliability of medical histories

The remaining case argued before the Appeals Board asks the judges to weigh the sufficiency of evidence that an employee didn’t suffer a work-related injury.

In Burleson v. Germantown Partners Supercuts, Walter Burleson alleged injuring his low back while styling a client’s hair – in particular, he was helping her out of a chair when he felt a “pop” in his back. An assistant store manager allowed him to go home early but didn’t recall Burleson telling him about a work injury. 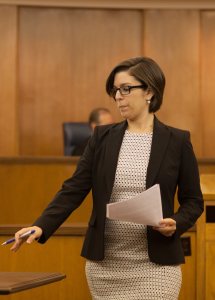 He went to the emergency room the next day, but records from the visit didn’t contain a history of him becoming injured at work, and on a “check-in sheet” that asked if the injury is work-related, the “no” response is checked. He saw two other providers afterward where a work incident isn’t in the records. Then, approximately two weeks after the injury, Burleson went to physical therapy and described a mechanism of injury as lifting a client out of a chair.

Judge Amber Luttrell concluded he didn’t satisfy his burden to show that a “specific incident” occurred at work that resulted in injury. She didn’t make a finding on credibility but relied principally on the medical histories – what they did and didn’t say.

This was error, according to Burleson’s lawyer, Monica Rejaei, who said that medical histories are not always accurate. The record contained no proof that her client checked “no” in response to the question of work-relatedness, she reasoned.

“Following that record, there is a plethora of other records that specifically detail the work injury,” Rejaei said, noting that Burleson was 38 at the time of the injury and had no history of back problems. 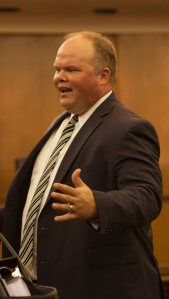 Supercuts’ attorney, Gordon Aulgur, said the claims adjuster didn’t testify at the hearing, but it’s Supercuts’ position that there was an investigation. He stated, “I think it’s clear from Judge Luttrell’s opinion that she agreed with us, that Mr. Burleson was not credible on his claims, based on his story, based on the evidence that contradicted his story, and based on the undisputed medical records in this case.”

The Appeals Board will release its opinions on all three cases within 20 days.